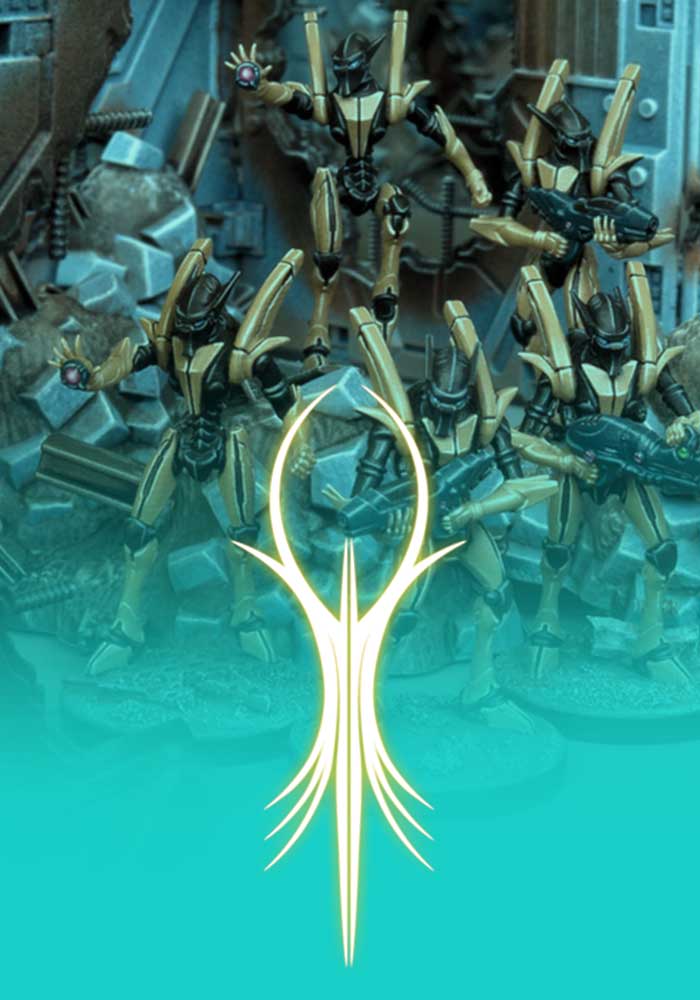 The Asterians venerate the pursuit of universal balance above all else, their very society based around this concept. Their disdain of warfare and violence has led to the development of technology which allows their finest warriors to fight on the battlefield without physical risk, piloting sophisticated remote drones known as Cyphers, which are as nimble and capable as a living being, with the added bonuses of far superior speed, strength and endurance. It was the Asterians who first warned humanity of the dangers posed by the Death Arc and tried to deter them from disturbing what lay there. That humanity ignored these warnings was disappointing, if unsurprising.

The Asterian people seldom find purpose to venture into GCPS territory, but they are often reported around Deadzones, though their purpose is unclear. Certainly it would seem that they are most often encountered where an outbreak of Plague or the discovery of one of the ancient alien artefacts which heralds it have occurred. Beyond that, none can say, for they appear from nowhere, as ghosts and disappear as quickly, with no explanation. Attempts to communicate with them are ignored, and attempts to stop them are futile.


Select the file icon below to view an example 100pt Asterians Strike Team Starter List to help you get started with the game and straight onto the battlefield.

The reclusive Asterians may be perceived as weak due to their small and nimble frames, but they have a core of solid steel. Boasting THE best shots in the whole of Deadzone – and that’s not just limited to the Cyphers – everyone is pretty handy when it comes to shooting. Plus, they have one of the most effective melee units in their Kalyshi, who can take down pretty much anything. The Asterians are not to be trifled with.

Your models are fragile though and in general you should keep the enemy at arm’s length to maximise your shooting prowess and make sure you invest in shields, lots of shields. Did we mention you should take shields? YOU SHOULD TAKE SHIELDS.

The Asterians also have the option of teaming up with the honourable Matsudan. These large sumo-wrestling space lizards have more health points, are Solid and have a better survive stat (4+) so should be able to stick around, while your Marionettes are grabbing the objectives.

Many an opponent has suffered under the deadly glaives of the Kalyshi. Unlike the usual AI-controlling Asterians, these warriors like to get up close and personal with their foe. They’re pretty fast (2-3), which means they can close in on the enemy early in the game, but it’s that Fight stat of 3+ that really stands out. Keep them in cover until they’re ready to strike, however, as they’ll easily get taken out by semi-decent shooting.

While the Kalyshi are your go-to for close combat, the Cyphers are your top choice for shooting, thanks to that frankly terrifying 3+ Ranged stat. The Troop option is armed with the Noh Rifle, which is perfect for picking off units with no armour, while the Specialist with a Fission Beamer (hello AP5) is great for taking out even Iron Ancestors. However, just like the Kalyshi, the Cyphers will die from just a withering look. Either invest in shields or hide until your opponent foolishly moves into the open.

It’s easy to overlook the Inashi when the Kalyshi tends to be the Asterian’s top pick for close combat, but it’s certainly worth a second look. The Inashi has a Fight stat of 4+, which is up there with most other close combat units, but benefits from Armour 2, AP2 and Frenzy (1). Thanks to the size benefit, you’re likely to be getting a bonus in combat and, even if you lose, the Armour 2 should protect the Inashi from taking too much damage. Consider teaming up the Inashi with the Kalyshi Deathstrike leader because the Dance of Death command ability let’s you move one cube after performing an Assault action.

Next >Enforcers
Back to Game Hub