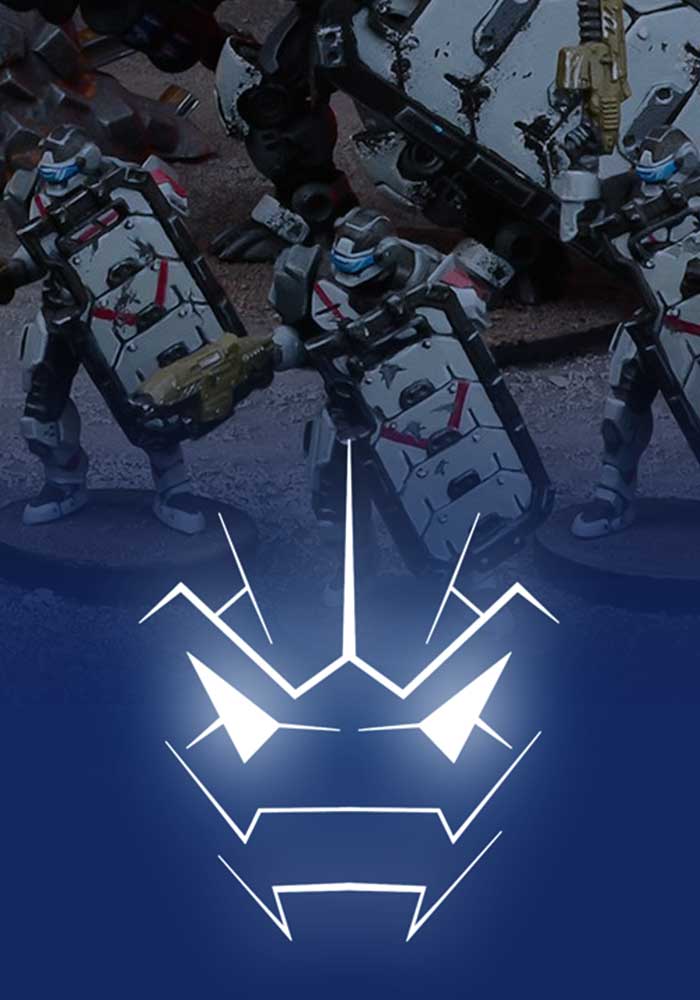 The product of a secretive research programme run by the Council of Seven, the men and women of the Enforcer Corps are the brutal hammer of the Council’s authority. Pervasive and super advanced nanite technology augments these soldiers to be better than the average human on every level, both physically and mentally. An Enforcer can run further, fight harder and think quicker than even the very best corporation veteran, and will follow whatever orders are handed to them without question or hesitation.

Complimenting their physical and mental perfection is the very best equipment and weaponry that the Council can procure. Armour which can stop all but the heaviest blows and impacts, weapons which combine pinpoint accuracy with deadly stopping power and vehicles built for speed and durability, combine with the natural aptitude of the Enforcers themselves to produce an unstoppable military force.


Select the file icon below to view an example 100pt Enforcers Strike Team Starter List to help you get started with the game and straight onto the battlefield.

Shoot, shoot and shoot some more. Plus, there’s armour for you. Armour for you! Armour for YOU! And, as if all that armour wasn’t scary enough, they’ve got the Survive stat to back it up. Most of the Enforcer units are on 4+, which means they’re a tough nut to crack for rival factions without a lot of armour piercing.

Pathfinders – one of the few units without armour – is the scouting arm of the Enforcers. As a result they have the Scout keyword, which means you can move them onto objectives early in the game, while their fellow Enforcers provide cover fire. Don’t expect them to stick around though, so be prepared with reinforcements.

Finally, let’s talk Peacekeepers. These have possibly had one of the biggest changes in Third Edition because some are now Troops, rather than all being Specialists. That’s right folks, you can now run an entire squad of Armour 2, Survive 4+ Peacekeepers. Plus, give them a Defender Shield and suddenly they’re even harder to shift. Let’s just not talk about the fact they’re 3VPs and at least 20pts each.

One of the most iconic units in the Enforcer list, the Strider has weapon options for every occasion. From the Tank Buster with Polaris Cannon, to the mighty Ajax, you can tailor the Strider to your preferred play style. As long as your play style is smokin’ fools.

We’ve already mentioned these before, but the fact that some are now Troops opens up so many options for your builds. The bog standard Peacekeeper with Dominator Rifle and Energy Gauntlet clocks in at 20pts, but packs a real punch and is tough to shift off objectives thanks to Solid. It was always a shame that Peacekeepers tended to be squeezed out of lists and we hope they’ll start to find their way back into Strike Teams for Third Edition because they’re such cool models.

< PreviousAsterians
Next >Forge Fathers
Back to Game Hub