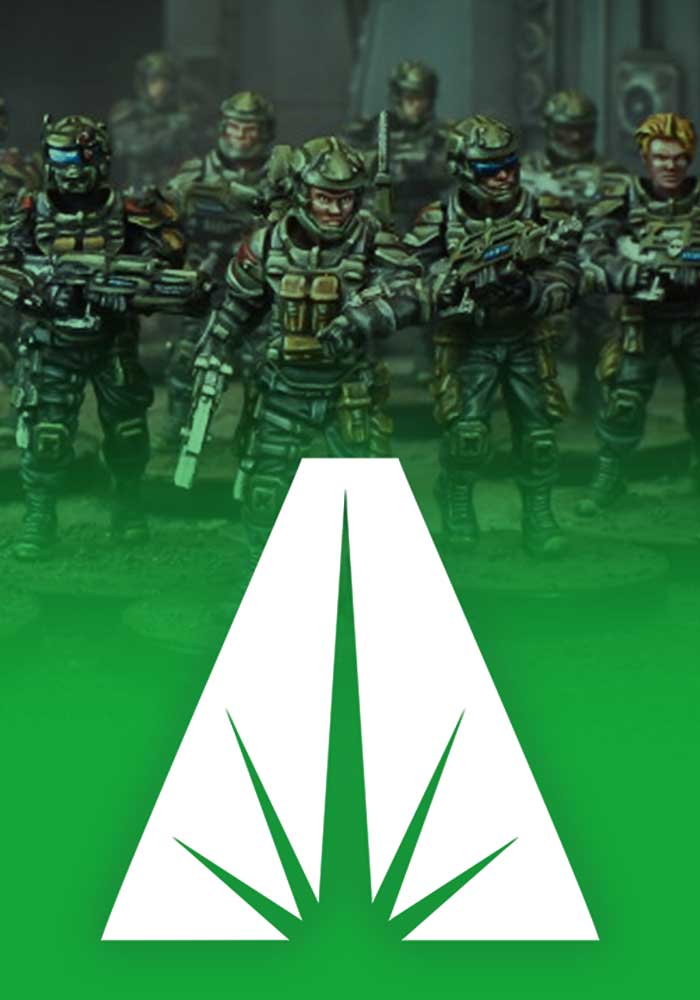 GCPS troops are typically not deployed to a Deadzone, instead they’re often just unlucky enough to be on the planet or inside the city when the containment protocols are declared. Defence garrisons are quickly pulled together, as the chaos breaks out around them. In the early stages of a lockdown, when the Council of Seven wants to stop any evidence leaking out, the GCPS are responsible for crowd control of the planet’s local population. Sadly the loyal troopers are often unaware that they have been abandoned by their corporation – who will do doubt receive a hefty payout from the Council to keep things quiet.

Cut off by the communications blackout, these forsaken troops are forced to rely on their training, equipment, and cunning to survive in the face of alien invaders, cut-throat mercenaries, and dwindling supplies. Even the Enforcers, often heralded as heroes of humanity, are more likely to execute them than help them – the Council cannot afford to have witnesses to the atrocities of a Deadzone. It is a testament to the courage and resourcefulness of humanity that there are still organised and effective militaries fighting in active Deadzones across the galaxy, although it’s unlikely records will remain of their bravery.


Select the file icon below to view an example 100pt GCPS Strike Team Starter List to help you get started with the game and straight onto the battlefield.

Compared to the teleporting Teratons, the hulking Stage 1A or the spectacular Spectra, it may appear that the puny humans are grossly outmatched in a Deadzone. However, this tendency to underestimate the humble GCPS trooper can often be the undoing of an opponent. Although not quite a horde army, like Veer-myn or Plague, a soldier’s life does come rather cheap with Recruits starting at just 6pts… and they’re worth zero VPs.

While the humble Recruit is perfect for objective grabbing, units like the Ranger are the models your enemy will come to fear – and likely target! Arm your Ranger with an Accutek LW-AWP sniper rifle before placing them on a high building and suddenly they’re able to control the battlefield.

Yes, the Ranger is likely to become a priority, but all the time your opponent is dealing with these models you could be destroying them with your heavy weapons team, which has an array of weapon options from the terrifying mortar to the explosive missile launcher. There’s a gun for every occasion in the GCPS!

We have just mentioned this, but pop a couple of Mortar Teams in your Strike Team and you can quickly disrupt even the best player’s plans. The ability to target an enemy anywhere on the battlefield is extremely powerful and the Mortar Team can make all the difference – particularly in the first round. Target a deployment zone cube that’s packed with models and, even if you don’t kill them, it’s likely you’ll pin them.

The GCPS don’t have a lot of units that are able to soak up damage – apart from the Strider – so the addition of the Ogre Terminator into the standard GCPS faction list gives you an interesting option. With five wounds, a Survive stat of 4+ and Armour 1, your enemy is going to have to pump some serious firepower into deleting this unit. And, while they’re doing that, your weedy recruits can be gleefully grabbing the objectives.

Well, we’ve mentioned the Ranger so much, it seems rude not to include it on this list. Aerial Deployment is certainly the ace up the Ranger’s sleeve, as you can place them on high terrain from the start of the game, before joyously blasting away. Meanwhile, the Jump Pack makes them able to leap gracefully between buildings without worrying about pesky gaps. Weapons-wise, the standard Laser Carbine has range 6, so will reach most places on the board, but it does suffer from a lack of armour piercing, so perhaps consider upgrading with some AP ammo for those key shots.

< PreviousForge Fathers
Next >Marauders
Back to Game Hub