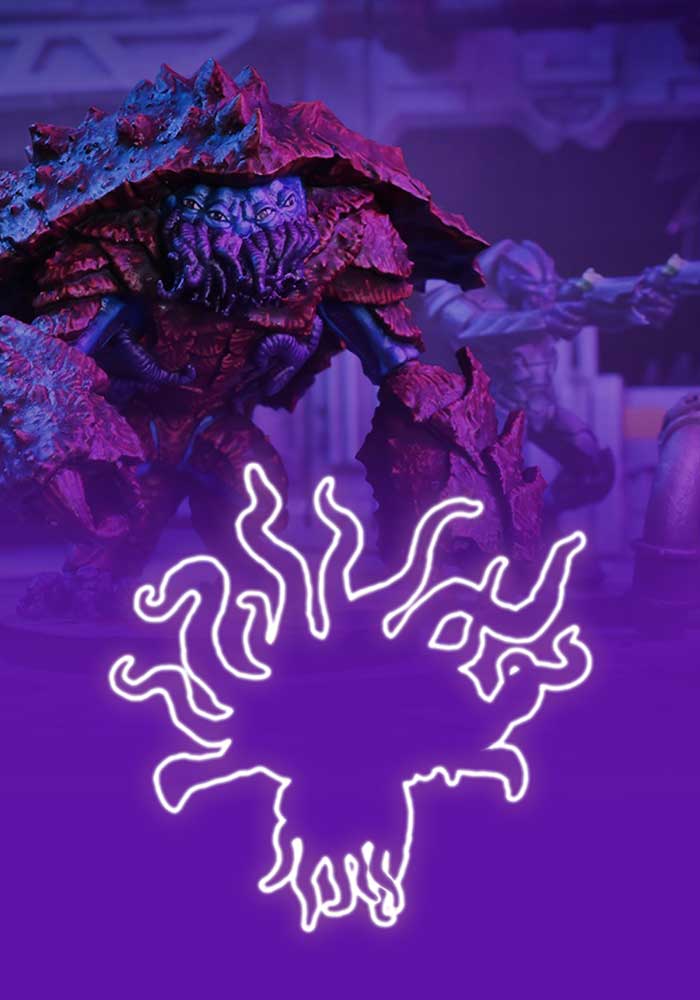 Previously thought to be a benign and peaceful race by the GCPS, many are starting to change their minds about the intentions of the so-called Nameless. Occasional raids on outposts and lone starships were written off as pirate activity, however it soon became clear the seemingly gentle Nameless had hostile intentions.

Though makeshift translation, it has emerged that back on the homeworlds of the Nameless, a religious rift is splitting the species apart. The vast majority of the Nameless live as members of the sects that dominate their worlds. Historically, the Federation of these groups has largely seen humanity and the rise of the GCPS with total indifference… but that has begun to change.

A particularly vicious group – known as the Ul-Ug’urub – has come to the conclusion that the GCPS is vulnerable and ripe for conquest. To the Ul-Ug, the GCPS is like the near-dead mass of a stellar whale. It is a floating feast, one that struggles feebly against the galactic tide, knowing that it will, eventually, inevitably, succumb to a circling predator. Many are already nibbling at its corpse. There is blood in the water, according to the Ul-Ug, and they have begun a movement to devour it.

The Federation as a whole though is not yet inclined toward war with the GCPS. But the Nameless tend to swim in a shoal. As long as the upstart sects continue to win victories against the GCPS, claim more territories and resources for themselves, their movement will grow. If they are not stopped, all-out war is inevitable.


Select the file icon below to view an example 100pt Nameless Strike Team Starter List to help you get started with the game and straight onto the battlefield.

The Nameless are a decent all-round force, with some decent shooting, combined with some potentially lethal close combat. However, they’re not an easy force to get to grips with as you have to use a lot of synergies to get the most out of them. By using a combination of Prey, Psychic and Stealthy, you can eventually overwhelm the enemy.

In terms of the big hitters, the Magnumite and Goliath are almost unstoppable and your opponent will have to focus fire to take them out. As a result, use these to grab key objectives because they’ll be able to hold them for a couple of turns at least. Meanwhile, the lowly Inkers can be used to create smoke clouds to keep your units in cover while they creep towards the enemy.

Taking of smaller units, don’t overlook the tiny Scuttler. Although it may not look much on its own, if you have a few of them together, they can take out seemingly stronger units. Meanwhile, the Assassin (as the name might imply) is great for taking out Size One models… although anything bigger might prove tricky.

The Leaders all bring very different play styles to the table – so choose one that will best suit you. A new addition for Third Edition is The Spawn. Thanks to its leader ability, it can respawn Scuttlers, which then be used as a member of your Strike Force. Perfect for evening up the odds later in a game.

< PreviousMazon Labs
Next >Plague
Back to Game Hub